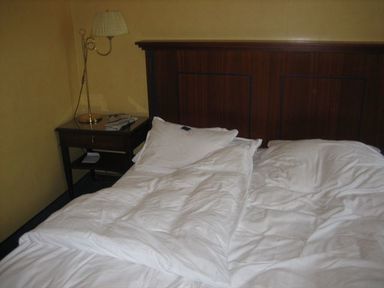 For those of you who are looking hard for explanations – The Daily Mail reports: “A brief encounter with a Jewish prostitute may have led to Hitler's genocidal Holocaust, claim psychiatrists.
They believe he may have caught the sexually transmitted disease syphilis which, if untreated, can eventually cause madness.
According to a report, mental and behavioural disturbances triggered by the advanced stages of the disease could have resulted in Hitler targeting Jews and the mentally retarded.
There is "ample circumstantial evidence" for the theory, according to a team headed by psychiatrist Dr Bassem Habeeb.
Dr Habeeb said that there had been speculation that Hitler had syphilis from diary entries made by his personal doctor, Theo Morrell.”

If you plan to visit a Jewish prostitute tonight please use protection.

On a more melancholic note I have to report that my departure for Ghana has been delayed because I missed my plane. I’m stuck in Stuttgart, tomorrow I’ll try to leave again.