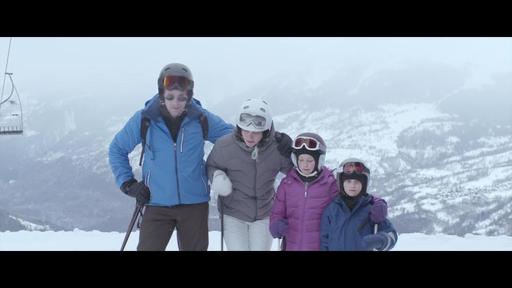 Ruben Östlund’s movie “Force Majeure” is about masculinity, or the lack of it for that matter.
The movie is set in a French ski resort, but the resort resembles more a god forsaken mountain top (with a hotel that reminded me strongly of Ikea) than of a cozy winter sport village.
For a change it’s not infidelity that shows us the darker i.e. the true side of marriage, it’s cowardice.
Tomas, played by Johannes Kuhne, runs away when he sees a avalanche coming instead of protecting his family.
His wife appears unable to forgive him, and what’s more after a few days of denial, he himself is unable to forgive the man he has become. Self-pity is the result, accompanied by a list of more common sins, among them infidelity and cheating while playing family games with his children. The man is pathological and pathetic, probably the result of civilization.
In the absence of war masculinity has become nothing less than phantom pain.
What’s more, sexuality doesn’t play a role in this film. Yes, there is a woman who boasts about her sexual adventures, but what she does in this story is not very clear, and her boasting accentuates only the lack of true sexuality.
Lust is something we have overcome, Östlund tells us. But cowardice is going to be a harder battle.
Civilization turned the man into a coward who is unable to repent. What the women was turned into is less clear, a herder of men I would say.
Of course, the ski resort is visited by whites only, mostly Scandinavians and Americans, politics doesn’t exist, this resort is the true gated community.
Throughout the film there is an eerie feeling of imminent danger, but the danger never materializes. Even the avalanche was not a real avalanche. The electric toothbrush plays an important role in the story as well. Marriage is brushing your teeth together with an electric toothbrush. Give up your penis and get an electric toothbrush, better for your teeth, better for your mental health .
And at the end of the film the tourists have become a kind of refugees. Because the wife of Thomas doesn’t trust the bus driver, who is supposed to bring the tourists back to 'the real world'.
It’s the longing for security that turns the tourists into a group of hapless sheep, walking down the mountain, waiting for guidance.
Then Tomas turns out to be a smoker, or should I say finally he is willing to admit that he is a smoker -- no sex, no heroism, but an electric toothbrush and a cigarette. The longer I think about this movie the better it gets.