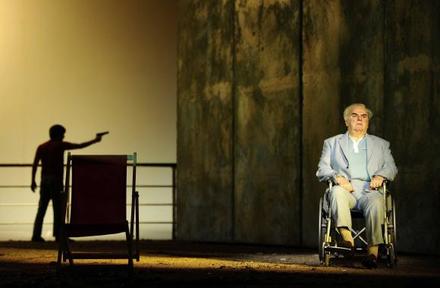 ‘“Klinghoffer” is as much an orchestral drama as a vocal one: the instruments are always brooding behind the voices, fostering doubt. An effect of pinging electronic timbres mixed with scrawny strings is especially prominent in the terrorists’ later arias, giving them a tacky sheen. Full, rich textures, such as Adams readily supplies in his orchestral scores, come along rarely: there is the sense of a progressive hollowing. At the very end, downward-slumping phrases in the violas and cellos evoke shudders of grief. Robertson and the Met players, having wrung a maximum of tension from the score, gave that final page a Mahlerian pang—the last throb of a devoted heart. Then the opera simply stops. The most troubling thing about “Klinghoffer” may be that it offers no consolation, no way out,’ writes Alex Ross in The New Yorker about the much discussed Met production

(Read the complete article by Alex Ross on this opera here.)

On October 3, 1985, the cruise ship Achille Lauro was hijacked by Palestinian terrorists. The terrorists killed one passenger, Leon Klinghoffer, then they walked off the boat. They were intercepted in Italy, tried, convicted and imprisoned, but they managed to escape or were released.

The daughters of Klinghoffer, Lisa and Ilsa, objected to this production. Their objection was printed in the program: ‘It [The Death of Klinghoffer] presents false moral equivalencies without context and offers no real insight into the historical reality and the senseless murder of an American Jew.’

Their objection can be understood and the Met did a right thing to include their note in the program, but I happen to disagree. ‘The Death of Klinghoffer’ does offer real insight. Precisely because news shows tend to estheticize everything including terrorism and murder, these acts have become completely estheticized events. The necessary artificiality of John Adams’ opera and the powerful libretto by Alice Goodman forces the spectator to take a step back, to see through the esthetics and hysteria of so-called objective journalism. Contemporary history is also history; the same components of the Greek tragedy are the components of the 24-hour news cycle. Sometimes we need opera to understand reality better.
When I walked out the theater this afternoon a lone protester, a young woman, was standing outside with a sign claiming that ‘The Death of Klinghoffer’ was an anti-Semitic opera. Probably she hadn’t seen the opera or heard the music, but we don’t need facts for opinions, we just need emotions.