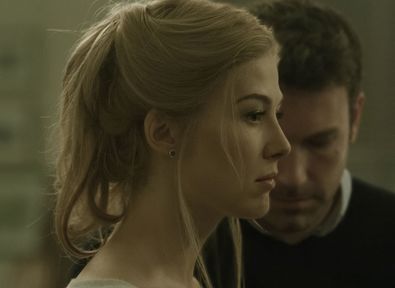 I haven’t seen “Gone Girl” yet, nor have I read the book, but this rather critical review in NYRB still made me want to see the movie. Zoë Heller writes:

‘Some women have obliged Fincher by complaining about the film’s depiction of its female protagonist. The main theme of their allegations has been that Amy’s character endorses a host of antifeminist myths, including the calumny that women are wont to maliciously invent rape charges. (This is a particularly irresponsible misrepresentation, it’s been claimed, because statistics show the incidence of false rape accusations to be very rare.)
But fictional plots are not obliged to reflect what is statistically likely. And still less are fictional characters required to act as goodwill ambassadors for their gender. The problem with Amy is not that she acts in vicious and reprehensible ways, or even that her behavior lends credence to certain misogynist fantasies. The problem is that she isn’t really a character, but rather an animation of a not very interesting idea about the female capacity for nastiness.
The principles of her invention are consistent with the method of Gone Girl as a whole. In lieu of any interest in the textures, the details, the ambiguities of observed human behavior, it starts from the delusional premise that the goodness of women and the loveliness of marriage are potent modern shibboleths and then sets up a group of gender avatars to “prove” the opposing clichés: women are the deadliest of the species and marriage is hell. The film is a piece of silliness, not powerful enough in the end to engender proper “disapproval”: only wonder at its coarseness and perhaps mild dismay at its critical success.’

I will leave aside the gender issues; to me the most interesting question is why people would flock to see a movie that apparently claims that marriage is hell, while at the same time these people, to the best of my understanding, strive to have a happy marriage or at least a stable relationship.

We strive for marriage because we need the other person – the significant other whom we can blame for our unhappiness.

Marriage is not so much about economy anymore, often not even about raising children together. Years ago a woman in New York told me that marriage was a good thing, because after a certain age it was shameful to go to a bar in order to have sex. But I would say that marriage is not about sex, neither is money the apparent basis of the institution anymore.

To understand the attraction of the long-lasting relationship or marriage we should take a closer look at the longing of the prisoner for the guard. And of course this longing is ambiguous. So we can long for the guard while at the same time we can be convinced that life is hell exactly because of this guard.