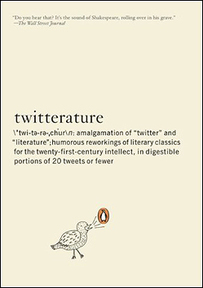 ‘With its 140-character limit, Twitter wouldn't seem an obvious outlet for narrative experimentation. Although it was conceived as a way for people to broadcast brief status updates, it caught on primarily as a means for users to connect with each other. Worldwide, there are currently around 650 million Twitter users who send a collective 500 million tweets each day. (In 2010, the U.S. Library of Congress appointed itself custodian of this output, preserving every public tweet in a digital archive.)
Yet tweeting has permeated the popular culture so deeply that the concept of Twitter literature was inevitable. Today, writers around the world such as Jennifer Egan, David Mitchell, and Teju Cole are producing original works on the platform. Even best-selling British writer Philippa Gregory, whose historical novels range in focus as far back as the 15th century, created a fictional feed for one of her characters. If Twitter literature started out as a scrappy affair, it is now moving rapidly into the mainstream. "Twitter is where the world tells its stories all day, every day" was the slogan for this year's Twitter Fiction Festival, which featured work by popular authors such as Rhodesian-born British detective novelist Alexander McCall Smith and American thriller writer Brad Meltzer. In an interview with Fast Company, Andrew Fitzgerald, the Twitter media guru who has spearheaded the festivals to date, proclaimed Twitter "the ultimate canvas for creative storytellers." For those who might think he's getting a little carried away, New Yorker staffer Ian Crouch recently speculated that the next Great American Novel could be in the works on Twitter.’

She is skeptical on the literary merits of Twitter, so am I, but she appears to be willing to acknowledge that Twitter can be the extension of performance art:

‘"Most see [Twitter] as a sort of ephemeral and unworthy venue," Cole told Matt Pearce of the New Inquiry. "My view is: That's where the people are, so bring the literature to them." The people responded, and Cole became one of the more popular highbrow authors on Twitter, with around 168,000 followers. Although he is currently taking a break from tweeting, as he recently told Foreign Policy, his reputation as a Twitter innovator could only have helped with the promotion of his novel Open City, which came out around the time he began "Small Fates." But the novel, while brief, is discursive and ruminative, written in a style very different from Cole's Twitter voice. In other words, he seemed to have discovered a way to use Twitter not as a delivery system for the kind of fiction he had been accustomed to writing, but as an impetus to create something entirely new.
Finishing "Small Fates" freed Cole to try out yet another method of using Twitter. In January 2014, he disseminated a story called "Hafiz," composed as a series of tweets, to a number of friends who had agreed to tweet the work. Cole then retweeted the story, line by line, so that the narrative appeared in sequence in his own feed. The effect was choral, as if each storyteller stepped out of the Twitter cacophony, spoke his or her designated line, and then disappeared back into the din: @AfricanCeleb: The seated man was closer to sixty than to fifty, dressed in an ordinary way, a button-down long-sleeved shirt, trousers.
@seyitaylor: His right hand was inside his shirt. He clutched at his heart and winced.
@pushinghoops: The young man with the phone said, "He's having chest pains. Earlier he said he was having chest pains."’

If anything Twitter is what the Germans would call “Selbstdarstellung” (self-expression is not a very satisfactory translation).
Yes, somebody like “Nein” is using Twitter in an intelligent and refreshing way. (See here.) But he is an exception. (Twitter is made for haikus and aphorisms.)
I for one am happy that there wasn’t Twitter in the Third Reich, imagine all these Julius Streicher tweets. And now I’m going back to reading Eva Menasse’s highly entertaining novel “Quasikristalle”. On paper that is, needless to say.