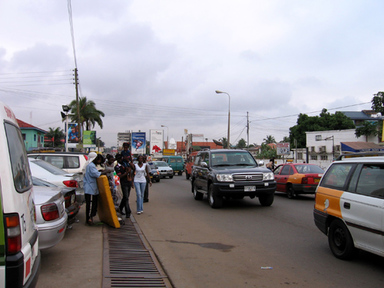 Since 1994 I have been writing a weekly column for a Dutch magazine (VPRO-gids). Last year I organized the contest: who can write the best essay titled “Why this world should not be turned into a better place.” The winner would travel with me to Africa, and I made clear that I expected the winner to write about his experiences.
This idea, at least the part of going to Africa, was copied from a New York Times columnist, which I highly appreciate Nicholas D. Kristof.
Five or six readers bothered to write an essay. Most of the people who entered the contest wrote abominable essays. Two of the essays were acceptable, maybe even more than that.
So my assistant and I decided that there were two winners.
This all resulted in me being now in Ghana with the young Timme and the not so young but nevertheless very charming Lutek. (For those of you who cannot read Dutch their blogs won’t make much sense, I apologize also on their behalf.)
Till now Ghana is rather pleasant and so are Timme and Lutek, but also pure for financial reasons it will take at least five years before I organize another contest like this.