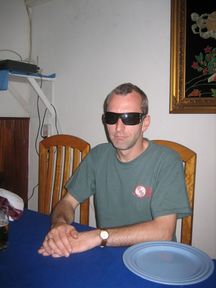 Not only am I a here in the company of the winners of the I organized a year ago, I’m also here in the presence of our guide George, which was expected, his brother Anthony, which was unexpected, and a driver, Mike, which was also unexpected.
Today we moved from a hotel to an apartment, tried to find an ATM-machine, which is accepting Master Card (the quest failed) and had Indian food for lunch.
Lutek (see picture) declared that the good thing about Ghana is that he can drink beer every day. Lutek is here for the beer, I concluded.
Timme, the other winner of the contest, devoured his lunch as a hungry bear, and he declared that he is here for the food.
Nevertheless Timme and Lutek are intelligent, young men, and it’s somehow refreshing to go to Africa for beer. Think of all those people who go to Africa to fight hunger and end up driving SUV’s, drinking beer and living on heavily guarded compounds.