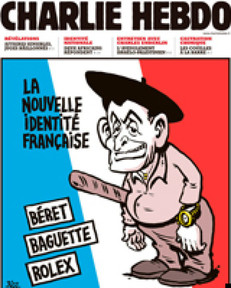 Jason Stanley in the Stone:

His point is important; it does make a difference whether you mock the symbols of the majority or the symbols of a minority that may have the feeling (and sometimes rightly so) that it is under attack.

By he forgets to add an important point: that assimilation is the capability and the desire to internalize other people’s ridicule.

And as I’ve said many times before: I believe that assimilation is the way to go for minorities.