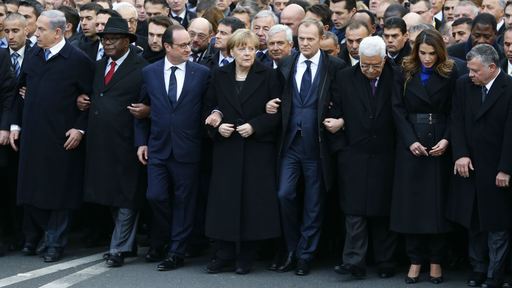 ‘Chancellor Angela Merkel of Germany was right there next to the president of France on Sunday, marching through the streets of Paris for all the world to see — all the world, that is, except the readers of an ultra-Orthodox newspaper in Israel.
The newspaper, HaMevaser, altered a third-page photograph of the march to remove Ms. Merkel and other female leaders, setting off snickers and satire on social media.
Ultra-Orthodox publications generally avoid pictures of women for reasons of modesty, and their intended audience has been known to scratch women’s faces out of bus advertisements and to bar them from running for public office in their parties. But some people saw the deletions from the Paris photograph as a more serious sin.
“It is rather embarrassing when, at a time that the Western world is rallying against manifestations of religious extremism, our extremists manage to take the stage,” Allison Kaplan Sommer commented on a blog for Israel’s left-leaning newspaper Haaretz. She berated HaMevaser for “denying the fact that in the wider world, beyond the ultra-Orthodox Jewish community, women do stand on the world stage and shape events.”’

‘Rama Burshtein, an ultra-Orthodox filmmaker whose 2012 movie “Fill the Void” won international acclaim, said in an interview that the alteration of the photo would make perfect sense to the newspaper’s readers.
“It’s very, very, very, very, very hard for a nonreligious person to understand the purity of eyes,” Ms. Burshtein said. “By us, men don’t look at women’s photos, period. As long as you don’t know that, then it sounds ridiculous, or changing history or events. But we’re not here to get the events the way they are. We are here to keep the eyes.”’

We are here to keep the eyes.

What else is there to say?