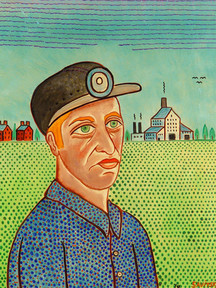 And now something on outsider art – a friend alerted me to this article by Martha Schwendener:

Outsider art has changed significantly over the last decade. Where it used to come with a story and a diagnosis (the work was found in an attic or a Dumpster and made by a person with schizophrenia), it has now been included in the 2013 Venice Biennale, Rosemarie Trockel’s 2012 retrospective at the New Museum and acquired by the Museum of Modern Art. Quibbles over whether it should be called outsider, folk or self-taught are less prominent, and there has been somewhat of a shift to supporting living artists.
For instance, the current Outsider Art Fair includes five art therapy centers among its 50 exhibitors. The best-known, Creative Growth Art Center in Oakland, Calif., is showing a sculpture by Judith Scott (who died in 2005, and made work at the Center). Her cocoonlike pieces are on view at the Brooklyn Museum, too. The fair is also showing several skeinlike drawings by Dan Miller, whose art was acquired by MoMA. Both use an abstract idiom, demonstrating how so-called outsider trends often echo “insider” ones.

“Despite many changes in the outsider world, diagnosis still reigns. You’re often told, when you inquire about artists, that they were autistic, schizophrenic or developmentally disabled. It makes you wonder what it would be like to be given the same information at other art fairs: about the artist’s depression, alcoholism or obsessive-compulsive tendencies. Perhaps as outsider and insider worlds continue to merge, we will see more nuance on that front: a Spectrum Fair, for those not flagrantly anything, but on the spectrum.”

Read in the article in the NYT here.

Not only in the arts outsider and insider worlds should continue to merge. In some restaurants the staff consists of people with a psychiatric disorder, for example restaurant Freud in Amsterdam. But perhaps other businesses should also try to merge outside and inside. Wouldn’t it be nice to have a bank that states: “Half of our investment bankers are outsiders, they suffer from social phobias, schizophrenia, autism and several personality disorders. We are proud to work with them on their future. The return on investments done by outsiders is higher than the return on investments done by insiders. Outsiders beat insiders. Bank with our outsiders.”

Or an army unit that is designed for outsiders – wouldn’t it be hopeful to have an army that let the outsiders do some fighting as well?

Diagnosis still reigns of course also among insiders. It could be a concept to fight sluggish book sales: meet the author and diagnose him. You got the diagnosis right? Get a book free.