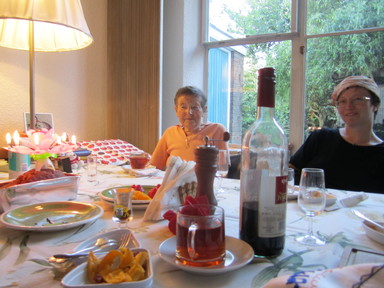 My mother’s funeral should have taken place at 7:30 PM but it took much longer to bring her body from the airport to the cemetery in Jerusalem where my father was buried in 1991. (My sister was nine months pregnant back in 1991, she couldn’t travel anymore.)
Yesterday evening at the memorial service in Amsterdam I was unable to say anything, but today after the rabbi insisted that I would identify my mother I decided that it was time to speak up. By the way, I refused to identify my mother; I said that if we were going to bury a strange woman instead of my mother it was fine with me, at this time of the day I couldn’t care about it anymore. My sister identified her, and she said that my mother looked rather green, but that besides the greenness it was obviously our mother.
I said in my eulogy that my mother had a delicate and beautiful sense of humor and that she valued naughtiness above many other things. To honor her legacy I would try to be naughty as long as possible.
It was extremely cold and windy in Jerusalem and finally we went with the body to the final stop. My mother was buried in a huge drawer. That’s in order to save space. There’s not enough room for all the dead bodies in the cemetery, so they started burying people in huge drawers.
I always feared that I would die before my mother. One of the things I wanted to avoid was precisely that. Now my mother is dead I’m ready to die myself, as far as one can be ready for that. The main task has been accomplished.
That’s not to say that my life is over, but overtime has started.