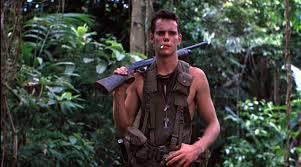 On Tuesday evening I showed the movie “Platoon” in The Hague, with a discussion afterwards about war, PTSD, propaganda, the depiction of the enemy and the difference between war then and war now.
The audience appeared to be critical of the movie, some said that it was a “John Wayne movie, just a variation on a Western” and that the “characters consisted of clichés.” The realism of the movie was also questioned.
I had the feeling that one of the reasons why the audience reacted rather hostile to this movie is that both war and soldiers are very far away. A convenient distance.