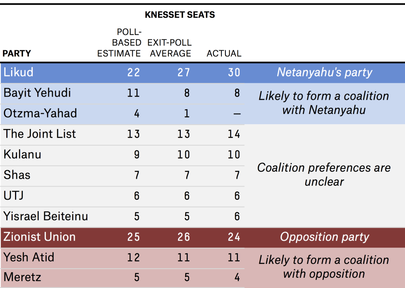 And something more on the Israeli elections and Netanyahu. Amos Harel in Ha’aretz:

‘3. Palestinian front: This is where the main threat to Netanyahu lies in the near future. It will start with Palestinian membership in the International Criminal Court in the Hague, which is scheduled to take effect on April 1, but will certainly not end there. "France is expected to submit a renewed motion for the end of the Israeli occupation in the West Bank at the United Nations, through the Security Council. The United States will reconsider its policy of casting a veto whenever blatantly anti-Israel resolutions come before the council. The European Union will be quicker to condemn all construction that’s uncovered in the settlements. This time around, the danger looms that Israel will pay a higher price in the form of diplomatic isolation, expanding boycott initiatives and even some economic harm.
In the next government, Netanyahu will no longer have Yair Lapid and Tzipi Livni to act as partial validation for his policy in the eyes of the international community. It’s also unlikely that even the delaying tactics of attorney Isaac Molho, Netanyahu’s representative to the peace negotiations, will be able to persuade the international community of the premier’s good intentions – all the more so after he retracted support for the two-states-for-two-peoples vision under the pressure of the the election campaign’s final days.
In these circumstances, the Palestinians do not necessarily need a third intifada to advance their cause. It’s enough for them to exert political and diplomatic pressure – but they are threatening more than that. Jibril Rajoub, the former head of the Palestinian Preventive Security Force and now deputy secretary of Fatah’s Central Committee, said on Wednesday, after the election results were known, that the place of the 1994 Paris accords (in the economic realm) and of security coordination with Israel is “in the garbage heap of history.” 4. Iranian nuclear project: Israel’s influence is now apparently quite limited on this issue. Instead of trying to add his input to the agreement of principle being worked out between Iran and the major powers, Netanyahu opted for a frontal clash with the United States, peaking with his speech to Congress. If a full agreement is reached by the end-of-June target date, the prime minister can be expected to adopt a highly critical stance toward it. That is unlikely to be translated into use of the military option, however. At the moment, it looks as though Netanyahu missed that particular boat toward the end of his second term, in 2012.’

Netanyahu’s best hope appears to be the Republicans. If the world will allow the status quo to continue depends very much on the rest of the Middle East. As long as there’s ISIS and war in Syria continuation of the status quo in Israel and the Palestinian authorities will be seen as undesirable, but a push to change it will be considered a waste of energy.

So the weather forecast: No war with Iran – more status quo.