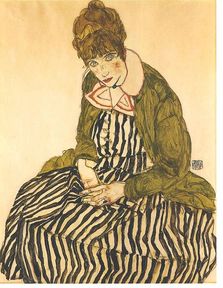 “Schiele’s mistress and model, the free-spirited Wally Neuzil, looking at the viewer anything but innocently with her legs drawn up, as though waiting to be penetrated. Despite all his bohemian airs, Schiele did not regard her as a suitable wife. Himself the son of a humble stationmaster (who had been driven mad by syphilis at an early age), Schiele wanted to combine his artistic explorations of dark sexuality with the bourgeois comforts of settled domesticity. For this he needed a bourgeois wife.”

(Read the article and see the paintings here.)

This is true not only for most of contemporary artists, writers and bohemians (what’s left of the bohemians that is) but also for the middle class itself. We want to explore the darkness, darkness may consist of nothing more or nothing less than a party drug on Saturday night, a bit of cocaine on Wednesday evening and a swinger’s club on Sunday afternoon, but whatever our darkness may consist of we very much appreciate the bourgeois comforts.

Actually, this is the very definition of the bourgeoisie: people who combine explorations of dark sexuality (and other sorts of darkness) with the comforts of settled domesticity.