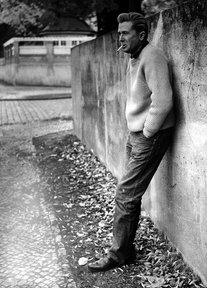 While working on an afterword for the Dutch translation of Marek Hłasko’s Israeli trilogy (three of his novels that take place in Israel) I reread one of Salinger’s Nine stories, Pretty Mouth and Green My Eyes. Because for reasons that are not completely clear to me, Hłasko keeps referring to this story in his trilogy.
I have to say that it was a pleasant surprise:

‘“Brains! Are you kidding? She hasn’t got any goddam brains. She’s an animal!”
The gray-haired man, his nostrils dilating, appeared to take a fairly deep breath. “We’re all animals,” he said. “Basically, we are all animals.”
“Like hell we are. I’m no goddam animal. I may be a stupid, fouled-up twentieth century son of a bitch but I’m no animal. Don’t gimme that. I’m no animal.”’

Perhaps, a tad too many exclamation marks but the dialogue is clearly surviving. Remains the question what was Hłasko seeing in this story particular, besides the obvious, namely the cuckolding and to be more precise: the question when does cuckolding become a problem? I would say the man who believes that he is no animal. Hłasko had a weak spot for men who wanted to be more than an animal. For ambitious animals that is.