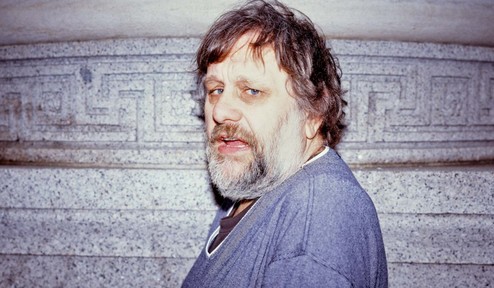 And now something on Žižek and obscenity – (a friend alerted me to this article):

“SPIEGEL: Doesn't every culture have a pain threshold for intolerance?
Žižek: There are things that are impossible to tolerate, "l'impossible-à-supporter," as Jacques Lacan put it. What would happen if some magazine openly made fun of the Holocaust? What about jokes that are felt to be sexist or racist? The left-liberal or libertarian position on general irony or grating humor tends to go in the opposite direction -- toward increased sensitivity for the defenselessness of others. You know, obscene jokes are a good test of the tolerance threshold between many cultural groups. I love them.
SPIEGEL: I'm tempted to ask, seriously?
Žižek: In earlier Yugoslavia, each constituent republic had a joke about the others. For example, Montenegrins were considered to be lazy. Montenegro has earthquakes. So why does a Montenegrin stick his penis in every hole or crevice? He's waiting for the next trembler because he's too lazy to masturbate. Or take the Jewish joke -- they can be wonderful in their self-derision. Do you know this one? A Jewish woman of Polish origin -- they're considered to be particularly serious in nature -- stoops as she cleans a tile floor. When her husband gets home and sees her stretched backside, he pulls up her skirt in excitement and takes her from behind. When he is finished, he asks his wife if she has also been brought to climax. No, she says, I still have three more tiles to go. Without obscene exchanges like that, we don't have any real contact with each other -- just a cold respect.”

The obscene joke as the way forward to real intimacy – I’m in favor of it, but also I’m in favor of courtesy.
So if you are like me, a libertarian who believes in courtesy, this is what you should do:
Imagine you meet a stranger, and you feel that intimacy between you and the stranger may happen you say: “In my world the obscene joke is a tool to get more intimate with each other. If you cannot subscribe to this worldview this is the moment to let me know. It’s a bit a like being on a plane in the emergency exit row, if you don’t like to open door in cases of emergency the flight attendant will find you another seat. If you don’t like my proposal we will always have the option of cold respect. But think about it, this is what intimacy comes down to, opening the door in cases of emergency, and this is not an obscene joke, this is what I would call reality. Now it’s time to sit down and discuss the distinction between reality and an obscene joke.”