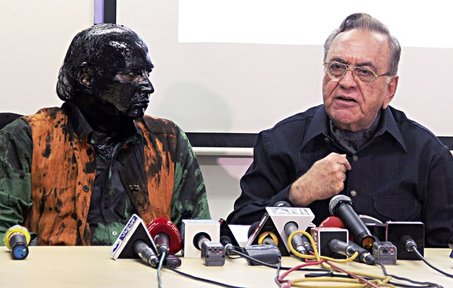 A friend alerted me to this article by David Barstow and Suhasini Raj in NYT about writer’s protests in India.

‘The novelist Nayantara Sahgal said she was returning India’s highest literary honor to express sympathy for “all dissenters who now live in fear and uncertainty.” G. S. Bhullar, a short-story author, said he was giving back the same award to protest the “violent retrogressive forces dictating terms in the field of literature and culture.” Mandakranta Sen, a Bengali poet, said she was sending her award back to protest “attacks on rationalists.” In the last month, 35 leading Indian authors and poets have returned coveted awards from the National Academy of Letters in a collective revolt against what Salman Rushdie this week called the “thuggish violence” creeping into Indian life under the Hindu nationalist government of Prime Minister Narendra Modi.
The writers’ revolt, which began in September after a 76-year-old critic of Hindu idolatry was gunned down in his home, rapidly gained strength this month when Mr. Modi failed to promptly condemn the killing of a Muslim man, Mohammed Ikhlaq, by a Hindu mob because they suspected he had killed a cow and eaten its meat.’

‘Mr. Kalburgi’s death triggered a fierce debate among members of the National Academy of Letters. Mr. Kalburgi had been a member of the academy’s general council, and he received an award from the academy in 2006 for a collection of his academic research. Yet the academy issued no formal statements condemning Mr. Kalburgi’s murder.
Some members wondered whether the academy was keeping quiet because it gets government funding. Ms. Sahgal, for one, criticized the academy for acting as if it was “wise to be silent when writers are being killed.” That silence is what led Uday Prakash to be the first to return his award. “Writers are a family, but they don’t seem to care,” he explained.
In addition to the 35 writers giving back their awards, at least five others have announced their resignations from the academy. But not all academy members support the protests.’

I’m not sure if writers are a family, but even returning awards can be an effective method of showing dissent, at least if enough writers are returning their awards. This is slightly hopeful.