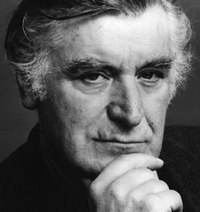 Janet Malcom reviews the biography of Ted Hughes by Jonathan Bate in NYRB:

'Hughes’s feeling of not writing enough is common among writers, sometimes even among the most prolific. In Hughes’s case it was certainly delusory. The posthumous volume of Hughes’s collected poems is over a thousand pages long and there are five volumes of prose and seven volumes of translations. But without question Hughes suffered blows greater than those it is given to most writers to suffer. His life had been ruined not just once, but twice. It has the character not of actual human existence but of a dark fable about a hero born under a malign star.

That it was Bate of all people who was chosen to write Hughes’s biography only heightens our sense of Hughes’s preternatural unluckiness; though the choice might not have surprised him. Ancient stories about innocents delivered into the hands of enemies disguised as friends were well known to him, as was The Aspern Papers. He emerges from his letters as a man blessed with a brilliant mind and a warm and open nature, who seemed to take a deeper interest in other people’s feelings and wishes than the rest of us are able to do and who never said anything trite or obvious or pious or self-serving. Of course, this is Hughes’s epistolary persona, the persona he created the way novelists create characters. The question of what he was “really” like remains unanswered, as it should. If anything is our own business, it is our pathetic native self. Biographers, in their pride, think otherwise. Readers, in their curiosity, encourage them in their impertinence. Surely Hughes’s family, if not his shade, deserve better than Bate’s squalid findings about Hughes’s sex life and priggish theories about his psychology.'

Of course we should be interested in the work of the author, not in his life but we cannot help confusing these two.

And squalid findings in the life of an author are very much to the liking of most readers.

It's a comfort to all authors that one day Janet Malcolm will be there to defend us.

And what if Mr. Hughes was a rather disappointed man, not to say a sadist. Sometimes it's hard to distinguish the disappointed from the sadistic.

I will read this biography to find out why exactly his family deserves better.