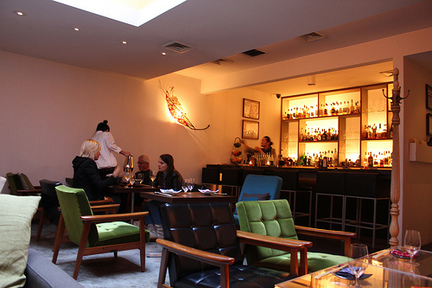 It was not easy to find a restaurant that was open tonight, but luckily there is always the Kitano.
Downstairs in the Japanese restaurant I was seated next to two elderly couples from New Jersey.
On the other side of the room a younger couple was talking about a restaurant named Bohemian. You could only get in if you knew someone who had eaten there and who had referred you to Bohemian.
The woman said to two Syrian guys at another table: "We know that the Simpsons had dined there. So you can always say that the Simpsons referred you to Bohemian."
Snow was not a topic. So much was clear.