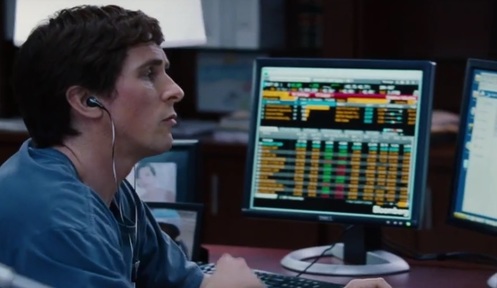 Anthony Lane in The New Yorker on Adam McKay’s movie “The Big Short”:

“Meet Michael Burry (Christian Bale), who works for an investment firm named Scion Capital. He has a medical background, and prefers to be called Dr. Burry, as if to suggest that he’s still involved in one of the caring professions. He also possesses a glass eye, an ear for heavy metal, and a busted internal radar. Socially, he makes Steve Jobs look like David Niven. (Bale can be such a chilly actor, but here he plays a chilly man, whose very gait spells bewilderment, and the result is unexpectedly touching.) As early as 2005, Burry has a hunch, grounded in laborious research, that the housing market, famed as a rock of reliability, could soon be washed away. He decides to bet against it, and word of his gamble spreads. Largely, it is greeted with derision, but it piques the interest of Jared Vennett (Ryan Gosling), at Deutsche Bank, a kind of lizard with sideburns, who in turn persuades Mark Baum (Steve Carell), the head of a rancorous hedge fund, to join the game.”

“That desperate confusion lurks at the root of “The Big Short.” Can you, in all honesty, enroll in the pursuit of happiness if it makes you wretched and leaves the happiness of others—millions of them, perhaps—in ruins? Yes, but if you do it in all dishonesty the pursuing is a lot more fun. And here’s the kicker: no one will put you in jail. McKay spends the final act attempting to whip us into a froth of outrage at the villainy that was perpetrated in the financial crisis, and at the well-dressed villains who slipped through the bars of justice. Nice try. By now, his movie has long since succumbed to its own brio. So expert are the performers that you wind up rooting for Burry, Baum, and the others despite yourself, knowing full well that they are fuelled by cynicism—by an ardent faith that the system will and must fail. They are little better than the bankers whose downfall they so gleefully engineer. “The Big Short” is a feel-good film about doom, and it pays the price. It bets on our indignation, and loses.”

There are just different shades of hypocrisy, there are different kinds of wolves of Wall Street, but even a sweet, cuddly wolf remains a wolf.

Bet against the system, but don’t try to change the system.