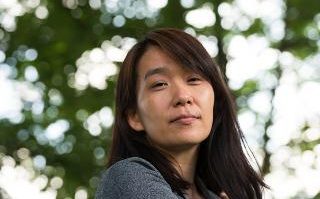 A friend alerted me to this exhange beweet Han Kang (author of 'The Vegetarian" -- highly recommended) and her English translator, Deborah Smith.

"Deborah Smith: As The Vegetarian was my first translation I had no idea how any aspect of the process worked, let alone what I would do day by day. Having spent most of my life reading, and making no distinction between work in translation and in English, I decided after graduating that I would learn a language and become a literary translator. I chose Korean partly for pragmatic reasons, because I knew the country had a lively literary scene, but in fact I had read nothing from there before, because there were no translations. Rather optimistically, I put on my Twitter bio that I was a translator, and eventually I suggested The Vegetarian to a publisher, who asked me to translate it. When I began I didn’t know what the usual author-translator relationship was, whether you were supposed to get in touch, or even if Kang spoke English. So I just went ahead and translated the whole book, sent it in with a list of questions, and waited."

"Han Kang: The Vegetarian had already been translated into several languages, none of which I could read. When I saw these books it always felt weird to have my name and picture on them but not really knowing what was inside. So I was very happy when it was translated into English because it is my only other language, and reading through Deborah’s translation, and her notes and questions, it was fascinating to ponder on the subtleties and possibilities of language. I sent back answers to her queries and some questions of my own and we started our exchange of emails. Sometimes I’d send a whole page just for a single line, but they were mostly short, and very pleasant, exchanges."

Read the article in The Guardian here.

One of my French translators believes that there is no reason why a translator should bother asking questions to the author. For one reason, a dead author is not able to answer questions and the living authors have already enough advantages compared to their dead colleagues.

That;s unmistakably the case but as Han Kang and Deborah Smith demonstrate, the conversation between author and translator can be advantageous for both parties.