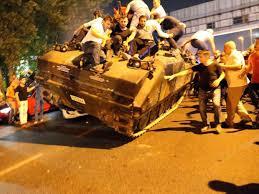 Anshel Pfeffer in Ha'aretz on Turkey, social media and the coup:

"The first rule of a coup d'état is that the plotters have to take control swiftly of the state broadcaster’s building to convince the nation that they are now in control. The Turkish officers that planned and carried out the coup which began on Friday night and now seems to be failing, went by the textbook. Barely two hours after they had seized key positions in the capital Ankara and Turkey’s main city Istanbul, they were in the offices of the TRT station, forcing the anchor to read their message. The government of “traitor” President Recep Tayyip Erdogan had been deposed, the army was now in control and a new constitution would be drafted soon. At that point it seemed like curtains for Erdogan.
The coup had been scheduled for the president’s holiday, but the plotters failed to hold him incommunicado at the resort in Marmaris on the Aegean coast. Before boarding a presidential jet back to Istanbul, Erdogan broadcast a message to his supporters, using FaceTime, shown on Turkey’s private television channels and also sent out on twitter. He called on all Turkish citizens to take control of the city squares and the airports. It worked, tens of thousands took to the streets, challenging the army’s tanks and making sure that when Erdogan’s plane arrived, it could land safely. By that time, police and the security services which remained loyal to the president, along with hundreds of civilians, were beginning to arrest many of the rebel soldiers."

"President Erdogan who believes that the internet and Twitter, as well as an independent media, are entities with anti-Turkish agenda, has now seen how they can be utilized also against those plotting against him. It is probably too much to expect, that now that he seems to have broken the coup against him, he will change his attitude towards them."