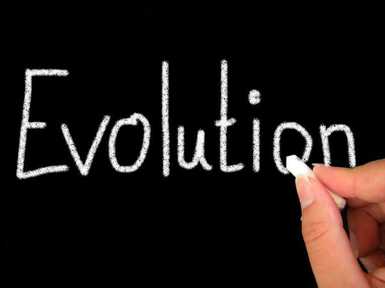 A friend alerted me to this article by Adam Frank about reality and evolution:

'Look around you. What do you see?

Other people going about their business? Rooms with tables and chairs? Nature with its sky, grass and trees?

All that stuff, it's really there, right? Even if you were to disappear right now — poof! — the rest of the world would still exist in all forms you're seeing now, right?

This kind of metaphysical question is something you'd expect in a good philosophy class — or maybe even a discussion of quantum physics. But most of us wouldn't expect an argument denying the reality of the objective world to come out of evolutionary biology. After all, doesn't evolution tell us we've been tuned to reality by billions of years of natural selection? It makes sense that creatures that can't tell a poisonous snake from a stick shouldn't last long and, therefore, shouldn't pass their genes on to the next generation.

That is certainly how the standard argument goes. But Donald Hoffman, a cognitive scientist, isn't buying it.

For decades, Hoffman, a professor at the University of California, Irvine, has been studying the links between evolution, perception and intelligence (both natural and machine). Based on that body of work, he thinks we've been missing something fundamental when it comes to fundamental reality.

Fundamentally, Hoffman argues, evolution and reality (the objective kind) have almost nothing to do with each other.

Hoffman's been making a lot of news in recent months with these claims. His March 2015 TED talk went viral, gaining more than 2 million views. After a friend sent me the video, I was keen to learn more. I called Dr. Hoffman, and he graciously set aside some time for us to talk. What followed was a delightful conversation with a guy who does, indeed, have a big radical idea. At the same time, Hoffman doesn't come off as someone with an ax to grind. He seems genuinely open and truly curious. At his core, Hoffman says, he's a scientist with a theory that must either live or die by data.

So, what exactly is Hoffman's big radical idea? He begins with a precisely formulated theorem:

"Given an arbitrary world and arbitrary fitness functions, an organism that sees reality as it is will never be more fit than an organism of equal complexity that sees none of reality but that is just tuned to fitness."
So let's unpack Hoffman's theorem for a moment. To paraphrase the website Understanding Evolution, "fitness" is used to describe how good a particular organism is at getting its offspring into the next generation relative to the other organisms around it. When people study evolution using mathematics or computers, they imagine there are compact ways of describing what makes an organism fit for a particular environment. That's what they mean by "fitness functions."

So imagine you have two kinds of creatures living in an environment. The first is tuned to respond directly to objective reality — the actual independent reality out there. The other creature has behavior only tuned to its, and the environment's, fitness function. The second creature couldn't care less about what's really going on in reality. What Hoffman's theorem says is the fitness-tuned critter will — almost always — win the evolution game.'

So, our distortions of reality may help us to survive better. This is perhaps not such a revolutionary idea. But evolution may favor those with certain distortions that enable them to survive. Just see those elements in reality that will enhance your survival strategy. Fitness means also: being able to be hypocritical.