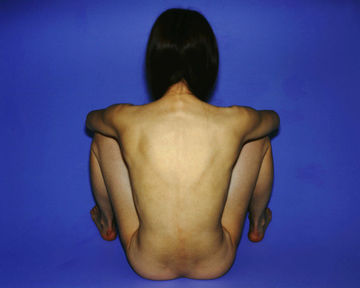 My beloved one alerted me to this article by Anna Hayward about an antimuze, very much worth reading:

'The author of the letter he’d opened on the plane, in the middle seat, was Isabelle Mège, a medical secretary at the Hospital Saint-Antoine, in the Twelfth Arrondissement of Paris. She had seen Elkoury’s exhibition of black-and-white documentary photographs “Sombres,” from 2002, at the Maison Européenne de la Photographie, and in her letter she proposed working with him on the creation of an image in which she would be present. What kind of image would be up to Elkoury. At the time, Mège was thirty-six, and for sixteen years had been contacting photographers whose work she had seen and admired, asking them to incorporate her somehow into their art. She had, by then, a large collection of images by working artists. Not all could be called portraits, and they varied in their style, but they all depicted her body, even if it was a tiny or unrecognizable part of it. In making the first contact with artists, she often used some version of the phrase “J’aimerais m’apercevoir à travers votre regard,” or, “I would like to see myself from your point of view.”'

'In an e-mail to me, the French philosopher Jean-Luc Nancy, who has written about art and its intersection with philosophy, told me that the key to understanding Mège’s work is “the act itself . . . an act that makes her into an artist of some sort.” He was interested in the fact that, while Mège appears to have the will of an artist, she distributes the means of creation to others; she is an artist whose medium is other artists. He invented new words to describe her work: “It’s a selfothermade,” he wrote, “not an auto-portrait . . . but it’s not a simple alloportrait either.”'

An artist whose medium is other artists.

Sometimes the writer stumbles upon a person whose medium is writers. The writer may believe that he chooses his models, but in reality more often than not he is chosen by his models.