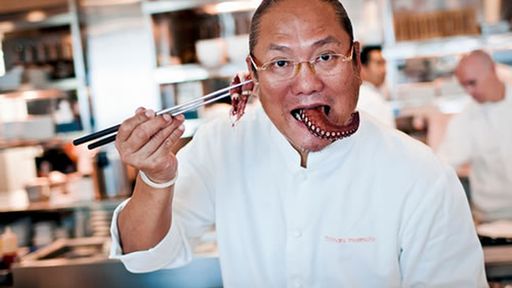 Dinner in Morimoto.
I had made a reservation for three people at 8:30. We arrived on time. A hostess said: "Give us a few minutes, your table will be ready soon."
Ten minuter later another hostess said: "Your table is almost ready."
Twenty minutes later a host said: "We apologize, but we will seat you within five minutes."
Thirty minutes later another host said: "Give us two more minutes. Your table is about to be ready."

I prefer bad food to incapable hosts and hostesses, and one has to admit that the food at Morimoto is above average. Also, we got some "Wiedergutmachung" -- an appetizer and a dessert from the house. You may say that I'm too harsh, but it was not enough.