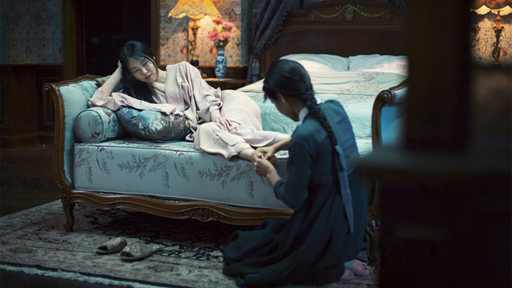 Manohla Dargis wrote in The New York Times: "Yet beauty can be a curse; a prison, too. Hideko’s uncle has forbidden her to leave the grounds, turning her into a bird in a gilded cage. Under his steady gaze and severe hand, with the ever-present threat of violence (there are rightfully ominous allusions to a basement), she has been raised amid material plenty with luxuriously appointed rooms as well as drawers and shelves stuffed with elegant feminine frippery — gloves, hats, gowns. Mr. Park loves displaying all these goods, much like a proud merchant (or Gatsby), even as moment by moment he pushes the narrative into ugliness, scratching off the gilt to reveal a grim drama in which Hideko plays both the leading lady and slave."

I'm sympathetic to the idea that we should chase away men out of the house of eroticism, but for the time being I'm afraid that we should live in a world that is mostly imperfect i.e. a world with men.