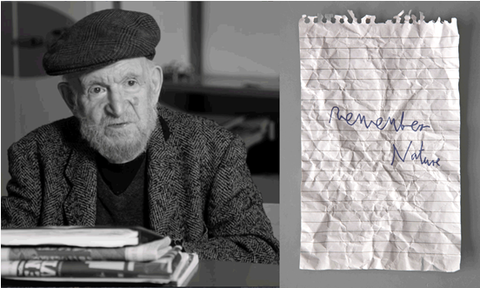 A friend alerted me to Gustav Metzger's obit in the Times, written by William Grimes:

'Gustav Metzger, a German-born artist and political radical whose entire career consisted of pointed attacks on the capitalist system, the commodification of art and organized power, died on March 1 at his home in London. He was 90.

The death was confirmed by his publicist, Erica Bolton.

Mr. Metzger, who went to England in 1939 as a young refugee from Nazi Germany on a Kindertransport train, first became known as the theorist of “auto-destructive art.” In one of the manifestoes he began issuing in 1959, he described it as “an art that re-enacts the obsession with destruction, the pummeling to which individuals and masses are subjected.”

At the Temple Galley in London in 1960, he demonstrated the concept by applying hydrochloric acid to a nylon canvas with a special paintbrush, causing it to shred.'

'“I was doing my first gig with the Who,” Mr. Townshend told The Guardian in 1998. “I took it as an excuse to smash my new Rickenbacker that I had just hocked myself to the eyebrows to buy. I really believed it was my responsibility to start a rock band that would only last three months, an auto-destructive rock group. The Who would have been the first punk band except that we had a hit.”'

And I would like to believe that I could have become a punk rocker, except that I had a hit too.