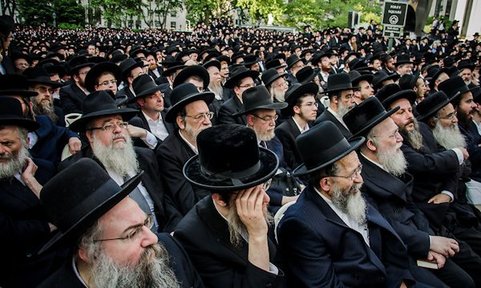 A couple of friends have the nice habit of alerting me to articles and essays that should not escape my attention. For example this essay by Taffy Brodesser-Akner about trying to escape from cloistered Jewish communities:

'Malky planned to kill herself before her wedding. Six weeks before the big day, or her “deadline,” as she calls it, she read an article in an Israeli newspaper about Footsteps. She called the group and told the counselor who answered that her parents were going to marry her off, and the counselor asked, “Well, what do you want?” Nobody had ever asked her this before. She went through with the wedding, because she loved her family and couldn’t imagine that they didn’t deep down know what was best for her in a way that she didn’t.

Her parents told her that she would get used to the man once she was married. On her wedding night, as her husband approached her, Malky ran to the bathroom and cut her gums, smearing the blood on her underwear and coming out and saying she couldn’t consummate the marriage because she had her period. The day after her wedding, Malky went to her parents’ house, and her mother shaved her head, a custom in some sects. Malky begged her mother to let her come home, but her mother pleaded with her to make her marriage work. Malky continued to refuse her husband, and after seven weeks, she again found Footsteps.

She left her husband, got a divorce and went to live on her own, but she remains vexed by her love for her family and her fear of embarrassing them. She’s an artist now, but for the longest time she wouldn’t put her name on her paintings or participate in an art show, because she knew how much that would damage her family’s reputation. On Friday nights she covered her head and walked over to her parents’ house, where her nieces and nephews would ask where her husband was and why she didn’t have children. She still goes every Friday night, but they don’t ask anymore.'

To abandon your religion often means to live without a family. Sometimes a compromise appears to be possible, but the people I know who left the ultra-orthodox community are considered 'dead people" by their family members.