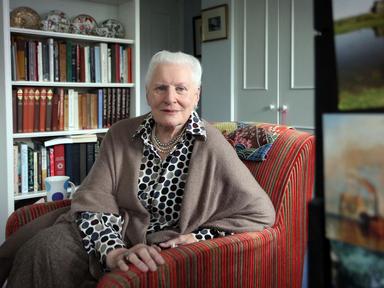 My girlfriend texted me that I should read this interview by Anya Raza with "acclaimed writer and editor Diana Athill shortly after her 99th birthday":

'AR: That sounds terribly romantic. Do you think dating has changed since when you were younger?

DA: I think people are more sensible now. Mind you, I think an awful lot of people who don't actually marry but live together are doing exactly the same thing. Which is, when you come to think of it, a pretty mad thing — spending your whole life with another person so much on top of them! Not easy at all! Men are very peculiar. You know we share DNA with chimpanzees and bonobos? One of the things in a chimpanzee's way of life is that there's the male, surrounded with females, which exist for him, entirely. That's very, very convenient to the male.

I have a theory that as we evolved, men really chose to hang on to that bit of being an ape. It's all they're doing, really. They're still being apes. Whereas I think women perhaps changed much more, because chimp ladies can only mate when they come on heat. In between, they are busy looking after the babies and grooming their gentlemen, whereas human ladies now can mate at any time. I think it was a mistake, actually. I don't think we ought to have wanted that. I think it may have been that we were trying to escape from the male domination. The male wanted to hang on, and they've succeeded in hanging on. The female, on the whole, has been rather feebly wanting to escape ever since, possibly.

AR: So it's in men's DNA to be unfaithful. Do you find stories of infidelity quite common?

DA: Very common. But you see, I am easygoing about just pure physical infidelity. I've come to the conclusion that if given a chance, a man will probably fuck somebody else sooner or later. I would not break up my marriage discovering that my husband, on a trip abroad, had an affair with someone. I would choose not to know. I think. I'm pretty sure.

AR: I suppose you don't believe in monogamy?

DA: I don't, really. I would want to go on being faithful to my husband though, if I liked him. If we were all right together, if we were understanding each other well, sharing the same interests, liking the children, I wouldn't fuss about that. I think that some marriages can survive it. Barry was against marriage. As the years went by, he and I, we stopped being lovers eventually. We ended up just being friends. Then, this is a marvelous piece of luck for me, because then he got this girl, Sally. This time it wasn't a little affair. It was quite a big affair. She was spending most of the time at our place, so I said, "Oh, my dear, why don't you come and live here?" Six years we lived together, all three of us, just as friends. I loved it. She is, to this day, one of my best friends.'

The inclusive marriage remains an attractive Utopia, to some at least.

In love you should never fight your competitors, you should slowly cuddle them to death.