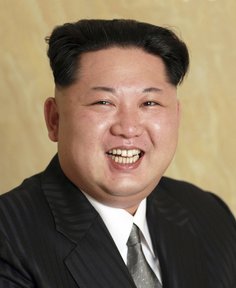 Mark Landler in NYT on Trump, Duterte and Kim Jong-un:

'Even Mr. Trump’s prime antagonist — the North Korean dictator, Kim Jong-un — has earned a surprisingly generous assessment from the president in recent days. Speaking on CBS’s “Face the Nation,” Mr. Trump expressed admiration that Mr. Kim had been able to keep a grip on power.

“A lot of people, I’m sure, tried to take that power away, whether it was his uncle or anybody else,” Mr. Trump said. “And he was able to do it. So, obviously, he’s a pretty smart cookie.”'

Didn't Kim Jong-un kill kis uncle? There were rumors that his body was fed to wild dogs, but that's probably untrue.

Nevertheless according to Mr. Trump a smart cookie is somebody who kills his competitors. Or perhaps this is the new American diplomacy: compliment your enemies on their bloodthirstiness.