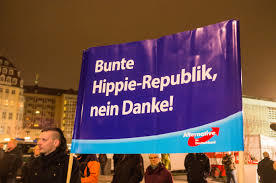 Severin Weiland in Der Spiegel on the possible demise of the AfD:

'Alice Weidel even felt sanguine enough to say that her personal goal for September national elections is 15 percent. Some in the party, though, aren't particularly pleased with Weidel's target. It is, after all, an ambitious goal, particularly given that the issue that propelled the AfD to significant support last year -- the refugee crisis -- has been fading into the background for months. Gauland, too, explains the AfD's relatively weaker present-day support with the fact that images of the refugee influx, now that they are coming in smaller numbers across the Mediterranean instead of along the Balkan route as they did in 2015, have largely disappeared from the news. "Some believe that we no longer need as much AfD," he said at the Monday press conference. "Unfortunately, that isn't true." (Gauland is notorious for his statement in 2015 that the refugee crisis was "a godsend" for the AfD.)

The AfD press conference (which the pregnant Frauke Petry, with her due date rapidly approaching, didn't attend) made it clear that the party is sticking primarily to its classic issues. Nobody knows, Gauland said, what will happen in July or August shortly before the election -- if refugee images will once again flood the television news or if Italian banks will slide into deep crisis. He also alluded to the party's deep Islamophobia: "I don't even want to imagine if there might be another terrorist attack."'

It's too early to say that the rise of the extreme right in Germany has been defeated. But back in December it looked like 2017 was going to be a year of revolution like 1917. No, 2017 is not another 1917.