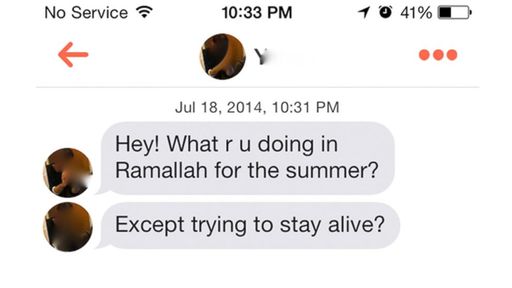 Daniel Bar-On in Ha'aretz on Tinder and prostitution:

Emmet says the first time she encountered real prostitution was on a regular dating site. She was looking for a relationship and met a man who offered money for sex. Tinder, which has become the most popular dating app, is thought to be a favorite for such men.
One of the most common ways prostitution has spread online is through a relationship with “support.” If you go on Tinder, you can see a profile offering such a relationship, which usually means a sexual relationship between an older and well-off man (sometimes they are; sometimes they aren’t) and a young woman in financial distress, who will be available for him when he wants – and who won’t ask any questions.

An insightful article, prostitution begin when someone offers money for sex. Or a pair of boots? When exactly does prostitution start? Perhaps we could say that it starts when the payment is the katalysator that pushes the relationship forward. I'm aware that many a marriage would then count as prostitution, but isn't that what marriage is first and foremost? Legalized prostitution.