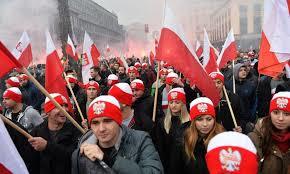 Anshel Pfeffer in Ha'aretz on the erosion of democracy in Poland:

'There is a particular irony in the timing of the new Polish law criminalizing any mention of the participation of the “Polish nation” in the crimes of the Holocaust. On January 27, 1945, when the Red Army liberated Auschwitz, the full scope of the horrors its soldiers discovered were deliberately suppressed on the Kremlin’s orders. Besides a cursory report in Pravda, there was scant mention of the Auschwitz-Birkenau complex of death and concentration camps.
Joseph Stalin was still struggling with his fellow Allied leaders over the future of Poland, which he demanded would come under Moscow’s rule, via communist puppets. The only narrative Stalin was prepared to see was one in which the Soviet Union had been Hitler’s victim and the brave soldiers of the Red Army had fought back, until victory was declared on the roof of the Reichstag in Berlin.'

'The Polish attempt to revise the history of the Holocaust will fail as well. As part of a much wider campaign by the Warsaw government to limit constitutional constraints and curb freedom of speech, it proves yet again that any whitewashing of anti-Semitism is always a sign of the erosion of democracy.'

The new Polish law criminalizing any mention of the participation of the “Polish nation” in the crimes of the Holocaust reminds us of Erdogan or dictators in banana republics, but alas it's Poland, member of the EU.
The other irony is that many on the right in the US and Europe applaud the not so new Polish nationalism, of course including its attempts to whitewash history.

The extreme-left, the extreme-right, what they have common is their gusto for whitewashing history.