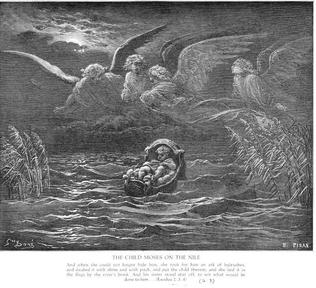 Freud on Moses, the father and guilt:

'They deserved nothing better than to be punished by Him, because they did not observe the laws; the need for satisfying this feeling of guilt, which coming from a much deeper source was insatiable, made them render their religious precepts ever and ever more strict, more exacting, but also more petty.
In a new transport of moral asceticism the Jews imposed on themselves constantly increasing instinctual renunciation, and thereby reached at least in doctrine and precepts ethical heights that had remained inaccessible to the other peoples of antiquity. Many Jews regard these aspirations as the second main characteristic, and the second great achievement, of their religion.
Our investigation is intended to show how it is connected with the first one, the conception of the one and only God. The origin, however, of this ethics in feelings of guilt, due to the repressed hostility to God, cannot be gainsaid.'

One of the great insights of Freud is that the dead father is more alive and more repressive than the living father.
The hostility towards God is not an exception, it's the rule. He needs hostility in order to be God. He cannot survive on a diet of love.