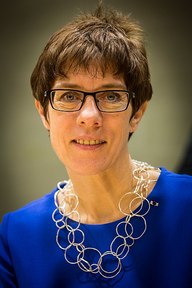 An interview with CDU General Secretary Kramp-Karrenbauer by Melanie Amann and Ralf Neukirch in Der Spiegel:

"DER SPIEGEL: Some in the CDU have warned against a rightward shift in the party. Do you believe such warnings are necessary?

Kramp-Karrenbauer: I think it is necessary for us to make clear once again what the bedrock of our party is, namely the Christian view of humanity. The CDU was a party that united different denominational and ideological currents. If the idea of a rightward shift means that we ignore those roots and only define ourselves as a conservative party, then I am strictly opposed."