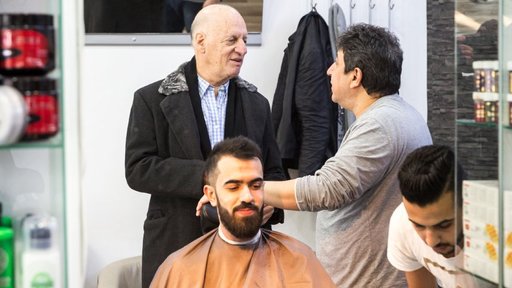 'The number of anti-Semitic crimes is consistently high in Germany. Last year, the police registered 1,453 anti-Semitic offenses, an average of four per day. Of these, 1,377 crimes can be ascribed to the far-right extremist scene. Only 58 crimes were classified as being the result of "religious ideology" or "foreign ideology." According to anti-Semitism researchers, the number of unreported crimes is high. Critics also complain that the judiciary in German does not classify many crimes that are anti-Semitic in nature as such.

Still, Ranan believes the concern in Germany is exaggerated. "I find it strange that people claim there's a big problem with Muslim anti-Semitism," he says. "There's a state of panic, especially in the Jewish community, that cannot be justified." He notes that Muslim women with headscarves are often given dirty looks, but that this rarely gets discussed in the German debate.

Ranan is critical of Jewish organizations and German politicians. He says the Central Council of Jews in Germany hasn't managed to separate itself from an Israeli government that uses anti-Semitism as a "political weapon." He calls the American Jewish Committee (AJC) in Berlin, which fights anti-Semitism and anti-Zionism, a "Jewish lobbying group."

Since the postwar founding of the Federal Republic of Germany, he says, the German government has viewed Jewish life as a litmus test: If the Jews were prepared to live in Germany, they believe, then our country would once again be a democracy. Ranan argues that groups like AJC abuse this. "Of course, it's clear the everyone is going to try to the most that they can out of a situation," he says.

In conversation, Ranan is a provocateur who debates energetically, but he remains objective in his book. He allows many voices to be heard, including some conciliatory ones. A 22-year-old says he would like to have Jewish friends, "because I would like to sit down with them and have an exchange." One Palestinian reflects on the hatred of Jews that he felt as a teenager. "But what good does this hatred do for me -- to what extent am I justified in my hatred?" Still, envy and prejudice pop up frequently. One young man, for example, expresses his anger that synagogues in Germany are provided with greater police protection and security than mosques.

Ranan spent more than a year listening to his interview subjects' arguments, hopes and desires, but also to their prejudices and fears. He says the catchphrases that often came up were about anti-Semitism and the Middle Eastern conflict, but that, if you scratched beneath the surface, there were other concerns: Germany's immigration society, its tensions and the question of how fairly opportunities are distributed in the country.

Integration needs time, and mortals are by nature impatient.