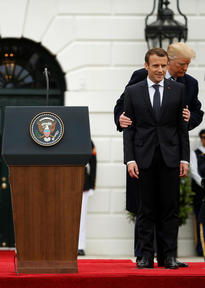 And now bromance and dandruff.
Julie Hirschfeld Davis and Kate Rogers in NYT on Trump and Macron:

'There was a mutual kiss on the cheek in the East Room, where Mr. Macron clasped hands with Mr. Trump, pulling him in for an embrace and a brief peck as Mr. Trump puckered his lips slightly to reciprocate.
“I like him a lot,” Mr. Trump explained to reporters and officials looking on.

Earlier in the Oval Office, the president had gently brushed what he said was dandruff off Mr. Macron’s shoulder.

Moments later, as they sat side by side, Mr. Macron placed his hand on Mr. Trump’s knee.'

Had Mr. Macron been a woman we would have called this kind of behaviour sexism.

Now is this a bromance? No it's not, it's an attempt to humiliate, ironic humiliation is also humiliation.

What's next? Mr. Trump taking care of the pimples of the French president? "Look, what I did to his pimples is what I will do to Iran."