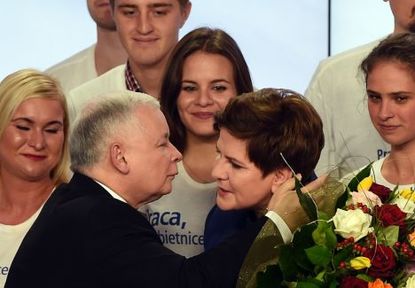 'The head of Poland’s supreme court insisted on Tuesday that she would resist efforts to remove her and accused the government of a “purge” in a bitter battle over the future of Poland’s judiciary.

An aide to Poland’s president Andrzej Duda said the term of office of Malgorzata Gersdorf would end on Wednesday, as part of a broader overhaul of the country’s supreme court — at the heart of a dispute between the European Commission and the EU’s sixth-biggest member state.

But a supreme court spokesman insisted Ms Gersdorf would work on Wednesday as normal. “The plans have not changed. [Ms Gersdorf] intends to be at work tomorrow. But what her future fate and decisions will be, that I don’t know today,” said Michal Laskowski.

Thousands of people took part in protests against the judicial overhaul in several Polish cities on Tuesday night. Further protests have been called for Wednesday morning.

The dispute stems from a law pushed through last year by Poland’s ruling Law and Justice party, lowering the retirement age of supreme court judges from 70 to 65. Those above 65 are obliged to step down on Wednesday unless Mr Duda agrees to extend their terms of office.

The overhaul of Poland’s top court and other changes have led Brussels to take the unprecedented step of launching a probe into whether the country still complies with the bloc’s fundamental values. On Monday, the commission launched infringement proceedings against Warsaw over the supreme court changes.

Ms Gersdorf was appointed for a six-year term, ending in 2020, and did not submit a request to have her term prolonged under the new law. Mr Duda’s aides said her role would therefore be carried out by another supreme court judge, Jozef Iwulski, until a replacement was elected. Mr Iwulski is 66.

Ms Gersdorf told a Polish news station earlier that she considered herself head of the court until 2020 and would not sign a letter of resignation.

She attacked the supreme court overhaul in a speech to students at Warsaw university, branding it “a purge in the guise of a retrospective change in the retirement age”.'

A Polish journalist told me on Monday that the Law and Justice party is bent on destroying the country. They just want revenge, he said, revenge on Tusk, revenge for the accident that killed Lech Kaczyński (see here) and they don't see it as an accident but as a conspiracy. He added: only 30% of the country is supporting them, much less than the support for Orbán in Hungary.

Less, but still a lot.