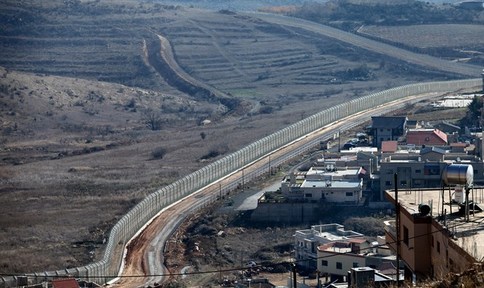 'The regime’s attacks around Daraa, almost 60 kilometers east of the Israeli border on the Golan, began with a force that even surprised the IDF a bit. Because Assad is dependent on Russian air support, it was thought that Russian President Vladimir Putin would not want the pictures of dead Syrian children ruining the public relations success of his country’s hosting of the World Cup soccer tournament.
But it turned out that the World Cup will not save the residents of Daraa. The artillery shelling and a few aerial bombardments led to a mass flight of tens of thousands of refugees from the villages and towns north and east of Daraa. The Syrian regime has already begun releasing video clips in which tanks can be seen rumbling down the abandoned streets.'

'On orders from above, the troops of the Iranian Revolutionary Guards and foreign Shi’ite militias are integrating into the forces of the Syrian army and have begun wearing its uniforms. The attack on Daraa is commanded by Syrian Brig. Gen. Suheil al-Hassan, nicknamed “The Tiger,” who already displayed his murderous abilities in earlier campaigns.
Gossip in Syria says that Hassan’s growing popularity has very much begun to bother Assad himself. The bombing and shelling have been accompanied by negotiations with Russian and Syrian generals over the terms of the rebels’ surrender, which are being held at the same time with the heads of the rebel villages.
A village that pledges anew its allegiance to Assad lays down its weapons, and the men from the village enlist in the army they have been fighting against for years. Those who refuse are transferred with their agreement on buses to the only other major area the rebels still control, near the city of Idlib in northern Syria. So far the military resistance is tiny, in Syrian terms. House-to-house fighting has not happened.
The IDF’s Northern Command is of the opinion that if the Assad regime increases the pace of its attack, after the World Cup in Russia ends on July 15, it will be able to return and conquer all of southern Syria within a few weeks. Daraa is the main target and along with it the nearby border crossing with Jordan.'

'Israel is less worried about the Assad regime and more about what will come afterward. IDF officers asked about it this week responded candidly: Assad is a vile murderer, but his regime is looking for stability and not a confrontation with Israel – and is aware of the balance of power between the two countries. Between 1974, the year in which the present commander of the IDF division on the Golan, Brig. Gen. Amit Fisher, was born in Kibbutz Merom Golan on the Golan Heights, and 2013, when the Assad government lost its control over southern Syria, the Golan was Israel’s quietest front.'

'On July 16, the day after the World Cup final in Moscow, Putin will meet with U.S. President Donald Trump in Helsinki, Finland, where . Syria will be one of the topics. Senior Israeli and American officials have expressed hope recently that as a result of the Putin-Trump summit it will be possible to reach arrangements in southern Syria, and Russia will keep its promises to keep the Iranians and their Shi’ite militias away from the border with Israel on the Golan Heights.
It is still not yet clear whether this optimism has any basis in reality. The Russians are talking to all the sides and it seems they are telling each of them what they want to hear.'

Telling everybody what they want to hear, that's diplomacy.

In the meantime the miraculous survival of Assad continues, with the open help of Putin, the less open help of the Western world.