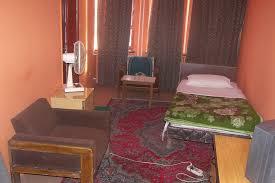 'Mahmodi, 23, was one of the Afghans who arrived in Kabul on July 4 on a deportation flight that coincided with the birthday of German Interior Minister Horst Seehofer. It was a coincidence, but Seehofer seemed to be satisfied. "On my 69th birthday of all days, 69 people -- and I didn't order this -- were returned to Afghanistan. That's far above the usual number," he said with a grin as he presented his "Migration Masterplan" last Tuesday. He seemed pleased with himself. It may have been a joke, but even members of his own party found it to be distasteful.
Seehofer didn't know at the time, but one of the 69 deportees had just committed suicide, a piece of news that made him look even more cynical. And Seehofer's statement has turned the Mahmodi case into a political issue.

On July 3, police picked Mahmodi up at the shelter in Hamburg's Hummelsbüttel district where he lived. They then took him to Munich, where a plane was waiting for Mahmodi and 68 other Afghans whose asylum applications had been rejected. The plane took off for Kabul at 11:27 p.m. the same day. One of the passengers recalls a general atmosphere of gloom on the flight. One or two federal police officers were assigned to accompany each Afghan and the migrants were forbidden from speaking to each other during the flight. Some cried.

Mahmodi wound up in Spinzar, a one-star Kabul hotel that IOM uses as a transition facility for deported migrants. A resident reports that on that particular Wednesday, a dozen men in jeans and T-shirts arrived in front of the mint-colored, 1970s building. The resident says that some of the returnees cried, could barely speak and looked tense and unhappy. He says that many didn't know where they were supposed to go and that some appeared to be under the influence of drugs. The man says the hotel's management often doesn't turn up for days at a time and that the returnees aren't provided with access to appropriate medical care.

On Wednesday evening, Mahmodi met with a school friend from Kabul, who he had contacted a short time before on Facebook. He complained to the man about the suffering he had been through. He said that he had no memory of his home country, that he grew up in Germany and felt foreign in Afghanistan. "Jamal Naser seemed depressed and tense," the friend says. "He asked me to get him some hashish." It was one of the last conversations Mahmodi would have.

A manager at Hotel Spinzar recalls how Mahmodi had asked to be left alone, saying he wanted to recuperate. It was only four days later, on Sunday, that the hotel's head of security noticed the stench of a decomposing body. At first, he thought there was a problem with the toilets. But then he determined the smell was coming from room 310 on the fourth floor. Jamal Naser Mahmodi had hanged himself next to his bed in a rundown hotel room with an orange floor, an orange armchair and floral-patterned curtains.

Mahmodi's death is more than just a personal tragedy. It raises questions about the extent to which the German government is keeping its promise to support deportees once they are back in Afghanistan. It's also a personal embarrassment for Interior Minister Seehofer of the conservative Christian Social Union, the Bavarian sister party to Chancellor Angela Merkel Christian Democratic Union.'

I once witnessed (as a journalist, with permission of the Dutch military police) a deportation at Amsterdam Airport. A Moroccan man, clearly confused, was sent to back to Morocco. The military police offered him a few euros for his first expenses in Morocco, before he was forced, in the company of two policemen, on the plane.

Deportations are inhuman, ineffective, costly, mainly symbolic and a reminder of what human beings really are: fuel for the machinery of the state.