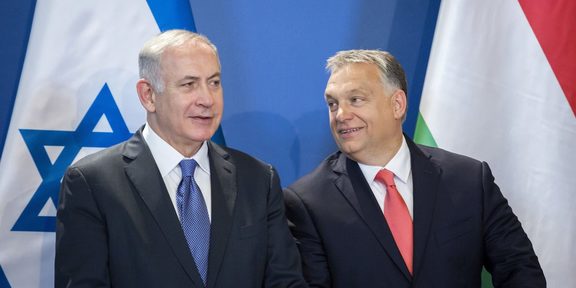 And now Hungary and Netanyahu and odd alliances (maybe not so odd) - Anshel Pfeffer in Ha'aretz:

'Strangely, the government began a strident anti-migrant campaign already in April 2015, five months before the major wave of refugees began. The campaign in its early stages consisted mainly of posters (in Hungarian, which few if any refugees understand) saying that migrants would not be welcome in Hungary. There are various explanations for the government’s clairvoyance; for example, this effort could have been targeted originally at the much smaller numbers of migrants arriving from Kosovo.
The government’s critics believe that the effort was simply an attempt to incite nationalist voters during a period when the government’s popularity was waning. The actual wave of refugees that arrived five months later was just a lucky break for Orbán.
“We simply had good intelligence,” says Zoltán Kovács, the main government spokesman, described by Politico Europe as Orbán’s “veritable alter ego.” “You should be asking why other countries in Europe weren’t prepared as we were.” Some officials in Budapest theorize that Hungary had intelligence from Turkey and Israel, two countries with which Orbán has worked hard to improve relations, on the impending wave.
No less intriguing is the fact that nearly three years since the refugee crisis, the government’s migrant policy is still the central plank of its propaganda. It remains the main subject in both the government and private media, much of it controlled by businessmen with close ties to Fidesz. Even the government-owned television channel that broadcast every World Cup game featured a 60-second news bulletin at halftime, most of it always devoted to migrant-related “news” such as footage of troops patrolling the border fence and reports on violence and chaos related to foreigners elsewhere in Europe.'

'Hungary’s Muslim community is one of the smallest in Europe, yet a Pew Research Center survey in 2016 found that 76 percent of Hungarians feared a terrorist attack by refugees, the highest proportion in all of Europe. It’s no coincidence that once it latched on to the issue, Fidesz, which between October 2014 and the start of its anti-migrant campaign six months later had been losing popularity amid corruption scandals, didn’t let go. Since then the party has climbed back to record levels of support.'

'Soros was the perfect choice as a Mephistophelean hate figure – a man with unimaginable riches who makes no attempt to hide that he’s trying to use his money to influence the destiny of the country of his birth. The government and its media call him a “global capitalist.” Soros’ presence is felt right at the center of Budapest, where the Central European University (or as the pro-Orbán press prefers to call it, Soros University) he founded and funds, is situated. Soros’ pictures can be seen at the entrances to the CEU buildings – at one of them is also a quote of his – “Reality has the power to surprise thinking, and thinking has the power to create reality. But we must remember the unintended consequences – the outcome always differs from expectations.” Soros, the financial wizard who founded his fortune on his ability to anticipate and precipitate changes in the global currency markets, certainly didn’t intend that his investment in Hungarian liberal democracy would be manipulated against him in order to erode that democracy.
Many Jews, in Hungary and elsewhere, believe that another reason has made Soros such a devastatingly effective totem for all Orbán’s incitement against liberals at home and abroad. Soros conforms to a much older stereotype than the capitalist plutocrat. He’s the Jewish banker, the puppet master pulling the world’s strings from behind the screen.'

'The relationship with Orbán is so important to Netanyahu that he was willing to give him cover, despite the barely concealed anti-Semitic nature of the Soros campaign. In July 2017, Israel’s ambassador to Hungary, Yossi Amrani, at the request of the leadership of the Hungarian Jewish community, issued a statement urging the Orbán government to drop the anti-Soros campaign.
The very next day, in an unprecedented slap down to an ambassador, Netanyahu ordered the Foreign Ministry to retract Amrani’s statement and issue a clarification saying that it was “in no way meant to delegitimize criticism of George Soros, who continuously undermines Israel’s democratically elected governments by funding organizations that defame the Jewish state and seek to deny it the right to defend itself.” Not only had Netanyahu publicly undermined his own ambassador, he had broken all precedents by backing the leader of a foreign country against the local Jewish community. The shock waves of Netanyahu’s backing of Orbán, his guest this week in Jerusalem, are still shaking Hungarian Jewry.'

Treason has become a popular word, the last couple of days. But surely, Netanyahu is ready, willing and able to betray Hungarian jewry to advance his own Trumpian agenda.
Tribalism, corruption, flirting with fascism, anti-humanism, après nous le déluge, that's what the new extreme-right (Orbàn, Erdoğan, Trump, Netanyahu, Putin et cetera have in common.) But in all fairness, the Dutch Minister of Foreign Affairs appears to be ready to join to club.