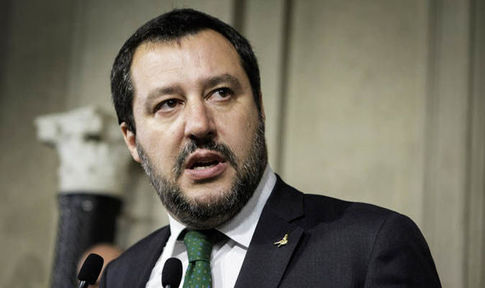 Fintan O'Toole in The Irish Times on trial runs and the F-word:

'Fascism doesn’t arise suddenly in an existing democracy. It is not easy to get people to give up their ideas of freedom and civility. You have to do trial runs that, if they are done well, serve two purposes. They get people used to something they may initially recoil from; and they allow you to refine and calibrate. This is what is happening now and we would be fools not to see it.

One of the basic tools of fascism is the rigging of elections – we’ve seen that trialled in the election of Trump, in the Brexit referendum and (less successfully) in the French presidential elections. Another is the generation of tribal identities, the division of society into mutually exclusive polarities. Fascism does not need a majority – it typically comes to power with about 40 per cent support and then uses control and intimidation to consolidate that power. So it doesn’t matter if most people hate you, as long as your 40 per cent is fanatically committed. That’s been tested out too. And fascism of course needs a propaganda machine so effective that it creates for its followers a universe of “alternative facts” impervious to unwanted realities. Again, the testing for this is very far advanced.

But when you’ve done all this, there is a crucial next step, usually the trickiest of all. You have to undermine moral boundaries, inure people to the acceptance of acts of extreme cruelty. Like hounds, people have to be blooded. They have to be given the taste for savagery. Fascism does this by building up the sense of threat from a despised out-group. This allows the members of that group to be dehumanised. Once that has been achieved, you can gradually up the ante, working through the stages from breaking windows to extermination.

It is this next step that is being test-marketed now. It is being done in Italy by the far-right leader and minister for the interior Matteo Salvini. How would it go down if we turn away boatloads of refugees? Let’s do a screening of the rough-cut of registering all the Roma and see what buttons the audience will press. And it has been trialled by Trump: let’s see how my fans feel about crying babies in cages. I wonder how it will go down with Rupert Murdoch.'

40 per cent? 30 per cent is enough. And fanatically committed? Just moderately committed.

Society is the institution to protect moral boundaries and to break them. Or perhaps I should say, society likes to seduce its members to exchange one moral conviction for another one. Fake morality may be one of our biggest threats, but how do we define it?