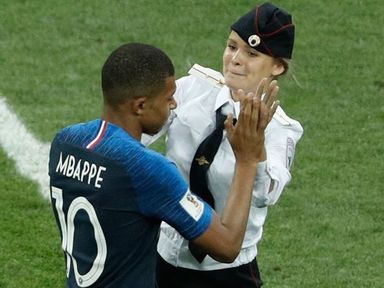 On Sunday, in the fifty-second minute of the final game of the World Cup, four women dressed in Russian-police uniforms charged the field, briefly disrupting the match. They were members of the Russian protest-art group Pussy Riot.

"Pussy Riot is often misidentified as a punk group, which is, in fact, only one of its many guises. The group, which was founded in 2011, is an open-membership collective that stages actions, documents them on video, and provides textual statements intended as clear and accessible explanations of their intentions and demands. The group’s best-known action was what they called a “punk prayer,” in which a group of women attempted to sing a political prayer of their own making inside the Cathedral of Christ the Savior, in Moscow, in the lead-up to Russia’s 2012 Presidential election."

"The four women, by taking the field, demonstrated exactly how that happens: the beautiful world of sport has its bubble punctured by people running and flailing haphazardly, intent on destruction. The group’s statement concluded with a list of demands:

And so Pussy Riot became the only people to make a meaningful statement about Russian politics during the World Cup—and it came on the eve of Vladimir Putin’s triumphant meeting with Donald Trump. They also created, on one of the biggest stages in the world, an image of unjust and arbitrary authority, the sort with which a hundred and forty-five million Russians live day to day."

On social media the French player Mbappe was praised for giving the double high five to one of the members of Pussy Riot. The Croatian player Lovren reacted a bit less humane, on pictures we can see him with an angry face trying to drag one of the women of the field.

The World Cup could have seduced quite a few of us to forget the repression and corruption of the Russian state. Needless to say that there many 'Putin-Versteher" in the West, more often than not they have sympathetic feelings for the extreme-right in their own countries as well.

Bread and games continue. A few games are over (Wimbledon, World Cup) - other games continue in full speed (Tour de France). I don't look down on people seeking oblivion. At best we can strive for something like part-time oblivion.