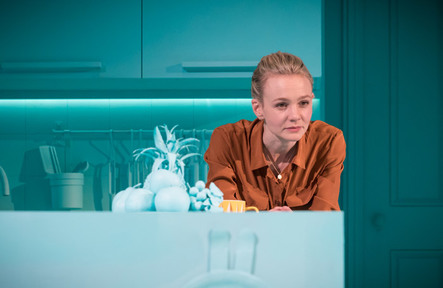 Saturday night, the cute Minetta Lane Theatre, the play "Girls and boys" by Dennis Kelly with Carrey Mulligan, about whom Ben Brantley in NYT wrote: " For the more than 100 uninterrupted minutes that make up Dennis Kelly’s “Girls & Boys,” in which Ms. Mulligan is the entire cast, you are unconditionally hers." (Read the review here.)

Yes, I was hers for about 95 minutes. I may have drifted away during one scene, but this had more to do with Mr. Kelly's play that began fantastic and ended as a hybrid between a therapy session and a sermon. (The same could be said about Hannah Gadsby's highly praised comedy show "Nanette”, but stand-up comedy is by nature a sermon with a twist. And our hunger for sermons is as intense as it was when Jesus was born.)

Since Mr. Brantley revealed the violence in "Girls and Boys" it's fair to talk about it. Violence, suffering and pain on stage (and often in reality also) happen to offer meaning to the victims and the audience, I guess that's one of te reasons why they are so addictive. The weakness of 'Girls and boys", which could be the point of the monologue as well, is that it is so obvious that without the violence only the dreadful banality of being alive remains.