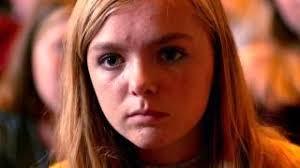 "Kayla, the thirteen-year-old protagonist of Bo Burnham’s film “Eighth Grade” (which opens Friday), is burdened with a degree of niceness that not even a saint should have to contend with," Richard Brody writes in The New Yorker in a review that's a tad too harsh.
(Read it here.)

To me Bo Burnham's movie "Eight Grade" evoked the sheer horror of puberty, the clumsiness of all social encounters in that period, the emergence of the superpower called shame. Later in life we learn to hide the clumsiness. Yes, some people may have never been bothered by clumsiness and awkwardness, we must pity them.

Mr. Brody complains that Bo Burnham has little to say about "living with social media" but I assume that he didn't want to say much about social media. The phone is a natural extension of the main protagonist Kayla (Elsie Fisher) -- Mr. Burnham has not much to say about living with capitalism either. (Only the performance of Elsie Fisher makes it worth seeing this movie.)

I would say that Kayla is too ashamed to be not nice, shame can lead to violence and sadism, but sometimes its main effect is quiet masochism that may come across as sainthood. Probably quiet masochism is the essence of sainthood.