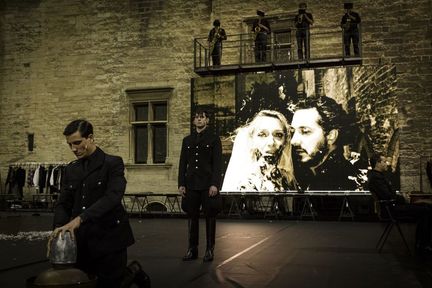 An evening with my friend P at the Park Avenue Armory, "The Damned", directed by Ivo van Hove. I've never seen the movie, the play was outstanding.

The show’s dominant conceit, though, is that of an ongoing requiem, for a people unwittingly taking part in a long funeral procession to their own graves. And without giving away the show’s most harrowing imagery — a superlative for which there’s plenty of competition — I should warn you that these are not quiet graves.

A long funeral procession to their own graves, sounds familiar?

We are busy to shorten the procession to our own graves. Whether that is good or not is a matter of taste. Where politics has become entertainment convictions will eventually turn out to be tasteful or less tasteful, depending on who you ask.