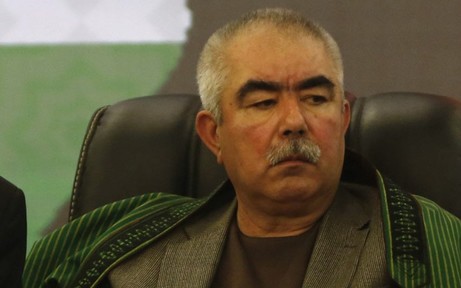 And now Afghanistan, vertically challenged people and identity.
Rod Nordland in today's NYT on the return of a butcher:

"After more than a year in exile, Gen. Abdul Rashid Dostum returned to his native Afghanistan on Sunday facing criminal charges of rape and kidnapping, as well as accusations of brutality, human rights abuses and killing his first wife.

Waiting to greet him on Sunday at Kabul’s international airport was a government delegation and, apparently, a suicide bomber.

An array of top officials met his plane and, despite the criminal charges against him, they gave him safe passage — not to jail, but to his office and home, in a deal that Afghan officials have said was negotiated by President Ashraf Ghani in the wake of widespread protests and unrest among his fellow Uzbeks.

Moments after he left the airport, however, a suicide bomber detonated explosives at the traffic circle at the exit, killing 20 people, including nine members of a security detail assigned to General Dostum, and wounding 90 others, according to police and health officials."

"The new political respectability of First Vice President Dostum — the country has three vice presidents — did little to curb his behavior, however. After the election, he would still at times be seen leading his private militia into battle, riding in his personal Humvee with two dwarf bodyguards on the hood, and engaging in drinking bouts in a country where alcohol is outlawed. And he is widely accused of continuing to use rape to subjugate his enemies, and occasionally his allies.

His exile to Turkey was negotiated with the help of diplomats to avoid the unrest that would most likely have erupted if he were to face trial on rape charges. But unrest in northern Afghanistan, where General Dostum has many supporters and allies, is happening anyway: Many Uzbeks have been angered by the government’s arrest of a powerful northern warlord and Dostum ally, Nizamuddin Qaisari, and his bodyguards. Video of government forces violently abusing his bodyguards became public, fueling protests and more outrage."

Now comment and please read the article here, details are important, but those two dwarf bodyguards on the hood of a Humvee, I can't get them out of my mind. I'm reminded of Grass, Fellini and Pasolini, among others. But above all, and I know you should be careful what you ask for, I myself would like to have two vertically challenged bodyguards. Not a Humvee, just these two bodyguards.
Anybody interested?

In the same newspaper this sentence by Max Fisher: "Forced to choose between putting democracy or identity first, people may not always pick democracy."
Read the article here.

Even if they are not forced to choose many people prefer identity to democracy. One of the reasons why identity politics is such a catastrophe. The fear of loneliness is the great trailblazer for the Apocalypse, for both the small and the big Apocalypses.