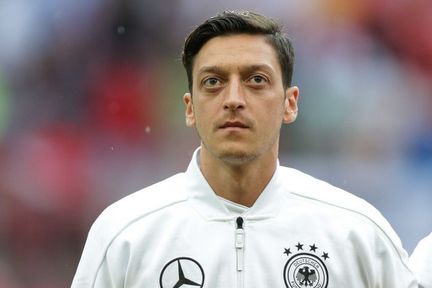 About having two or more hearts - John McManus in The Guardian on Özil:

'Özil epitomises the migrant who doesn’t fit the mould. His parents are from the Black Sea town of Zonguldak, but grew up in Gelsenkirchen in western Germany. He is a superstar at Arsenal who tweets his response to a German-Turkish argument in English. The response of the hardliners on both sides reveals a symbiosis, as they feed off criticism of each other to isolate those caught in the middle. Both Germany and Turkey are similar in having persistent ideas of “race” and “blood” defining the nation.

Rather than listen to the shrill voices on both sides, we should pay more attention to the player himself. “Like many people my ancestry traces back to more than one country,” wrote Özil in his resignation message. “I have two hearts, one German and one Turkish.”'

Clearly, racism, cowardice and hypocrisy play a big role in the affair-Özil, and lack of leadership, no need to repeat the obvious.

Özil's explanation for his apparent friendly meeting with Erdogan is at best naive, as already has been pointed by others:

"It wasn't about politics or elections, it was about me respecting the highest office of my family's country".

Well, sometimes you cannot respect the highest office of your family's country. Does this excuse the outcry, the racism, the ugliness? No.
But a small wrong remains a small wrong even compared to bigger wrongs.

As Deutschlandfunk and others clearly see, Erdoğan is the big winner of this affair.

Another example of the destructive results of the mix of politics and identity. Once upon a time there was a car-free Sunday in the Netherlands. Let's now start with an identity-free Sunday. Once a month we leave our identities at home, we become Zelig, for a start.