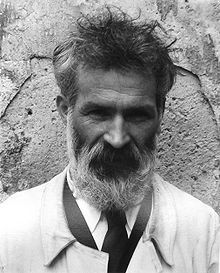 On starving artists --Hugh Eakin on Constantin Brancusi in NYRB:

'Few artists encapsulate the story of the early twentieth-century avant garde more alluringly than Constantin Brancusi. The son of Romanian peasants, he arrived in Paris around the same time Picasso did, but on foot. Within a few years, he had somehow managed to apprentice with Rodin. Then, throwing out the master’s methods, he completely redefined what sculpture was. Cultivating an image as a black-bearded ascetic, he wore simple white clothes, lived alone, and cooked his own food on the home-made stove of his back-alley Montparnasse atelier, while turning his favorite subjects—birds, fish, and a remarkable string of aristocratic women—into stupefyingly beautiful abstractions in polished marble or sleek bronze.

For years, Brancusi made hardly enough money to eat. In 1926, a version of one of his most extraordinary subjects, Bird in Space, was famously held up at the US border because customs officials didn’t think it was art. Sometimes, he even baffled his own cohort. Picasso (or perhaps Matisse) is said to have likened Brancusi’s 1916 Princess X, a glistening bronze torso of Princess Marie Bonaparte, to a large phallus. Yet, by the time of his death in 1957, the increasingly reclusive Romanian was regarded as one of the century’s greatest sculptors. (Peggy Guggenheim, who began buying his work in the 1940s and took artist-worship seriously, called him “half astute peasant and half real god.”) In recent years, he has been credited with paving the way for everything from mid-century abstract art to the postwar minimalists. And though he spent his entire life without a regular art dealer, he has finally conquered the art market as well: last year, a bronze version of his Sleeping Muse from 1913 sold for a staggering $57 million at Christie’s; that was quickly eclipsed this May, when a polished brass 1932 cast of La Jeune Fille Sophistiquée, his buoyantly curlicued “portrait” of British heiress and Montparnasse acolyte Nancy Cunard, sold for $71 million.'

'Indeed, the 1913 Armory Show, far from establishing a new public for Brancusi’s work, branded him—along with fellow provocateur Marcel Duchamp and the other “Cubistic” and “Modernistic” artists—as a symbol of all that was disturbing and “deranged” about modern art. For the next decade, his patron Quinn supported Brancusi virtually single-handedly, despite rapturous acclaim from fellow modernists such as Steichen and Ezra Pound (who was also on Quinn’s payroll). When Quinn died in 1924, there was so little American interest in his thirty-three Brancusis that Duchamp, together with Quinn’s art adviser and fellow Frenchman Henri-Pierre Roché, raised the money to buy them himself. Given the prevailing tastes, it’s little surprise that the US government mistook his work for high-luster kitchenware.'

Arrive on foot, manage to apprentice with one or two greats, make sure that the government believes your art is high-luster kitchenware. Repeat if necessary.