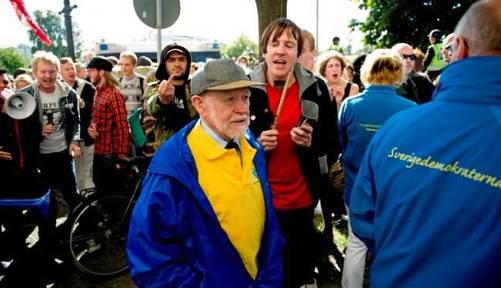 'Officially founded in 1988, the Sweden Democrat ideology has fascist roots that, despite its current leaders’ best efforts to muffle them, tend to re-emerge on a regular basis, just like within other right-wing parties built on a fascist or Nazi past.
Sweden has a century-long history of indigenous fascist ideologues and politicians and since the 1960s has been a key point for the emergence of both white supremacist and far-right parliamentary movements in Europe.
Just recently, two members were excluded from the party for explicitly identifying with Nazism. One regional candidate had purchased items from the neo-Nazi extremist Nordic Resistance Movement; his Facebook account featured posts praising Hitler, calling Arabs rapists and pedophiles, as well as a photo calling Anne Frank "the coolest Jew in the shower room." The other had purchased white power music and racist stickers online.
These two candidates were among 11 party members linked to online purchases from stores that sell Nazi memorabilia and racist goods. Another recent report indicated that several Social Democrat candidates were "deeply rooted in the Nazi environment, including members of Nazi organizations, Nazi activists and those who actively spread propaganda."
The party has serially attempted to distance itself from fascism by marketing a moderate face and by loudly condemning neo-Nazism, the same strategy followed by various other European hard right parties. '

'For the Sweden Democrats, the Alternative for Sweden is both a benefit and a threat. The Sweden Democrats fully distance themselves from the AfS and describe it as a neo-Nazi movement, thus coming out in comparison as moderates. But the emergence of another party on the far right clearly creates more competition and may harm the Sweden Democrats’ ambition to become the second largest parliamentary party.
But while Sweden Democrat leader Jimmie Åkesson declares a "zero-tolerance" policy on racism, that doesn’t seem to have resulted in a particularly effective filtering of the party’s candidates with Nazi sympathies. And, just as importantly, there is one form of racism that the party embraces publicly and wholeheartedly: racism against Muslims.'

'The Sweden Democrats’ outspoken anti-Muslim, anti-immigrant language has already influenced public discourse immensely. Longer term, it’s no longer quite so improbable that a party characterized by closeted neo-Nazi sympathizers and outright racists could even become the party of government in Sweden.'

We see the same pattern, in Austria, the Netherlands, Germany (some parts of Germany more than others), to name just a few countries in Europe.

There is racism that is not yet allowed and there is racism (racism against Muslims) that is embraced or at least accepted as a valid and maybe a bit coarse contribution to the public debate.

Of course, not all racism and anti-Semitism will end in concentration camps and genocide, but the fact that certain kinds of racism have become accepted is a sign that totalitarianism and anti-liberalism are winning.